Jack is 10 years old and has cerebral palsy spastic quadriplegia. He can’t walk, talk or eat on his own but understands everything you say and is the happiest young man you’ll meet.

In November 2016, Jack completed the Point to Pinnacle – the world's hardest half marathon, 21 km up Mount Wellington in Hobart, Tasmania. Jack wash pushed in a running chair by his Dad, Chris. Jack's friend Will Scott also experienced this challenge thanks to the support of the team of nearly 20 Just Like Jack runners.

In April 2015, Jack completed the 65km Overland Track (Overland Jack) over 6 days. He was carried on his Dad’s back and was supported by a small hiking team (including police, firefighters and a paramedic). Together the team raised $30,000 for Life Without Barriers.

During Kayak Jack (2009) he joined his Dad, Chris, for one hour everyday paddling from Launceston to Hobart (over 600 km in total). During this adventure they raised over $70,000 for St Giles. Chris and Jack have also finished two marathons in 2013 and 2014 (Chris pushed Jack the 42kms).

Jack’s life and his adventures aren’t about what he can’t do, they’re about how - with a little help from those around him - he can do just about anything.

Jack is one of the lucky ones. Those around him are healthy enough and able to support him in his adventures. Jack wants to raise awareness for other people who aren’t so lucky and need help in breaking down their own real or perceived barriers.

If coming across Jack means that one other special needs person gets a hello from a stranger, some extra help, attention or a new positive experience/adventure then we have all succeeded.

If you want to help Jack break down barriers and raise awareness for others like him please share his story or join him on one of his adventures. 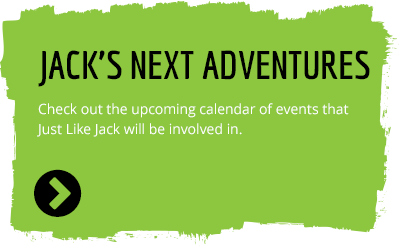